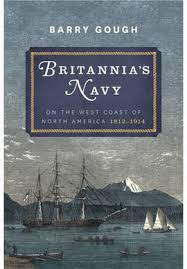 This handsome volume, published in hardback with a blue and white dust-cover (featuring E. P. Bedwell’s 1862 painting of the steam-sloop HMS Plumper on the front and a photograph of HMCS Rainbow in Esquimalt, January 1911 on the back), is an updated and expanded version of Gough’s 1971 inaugural volume of the University of British Ccolumbia Press, then entitled The Royal Navy and the Northwest Coast of North America, 1810-1914.

Barry Gough’s lifetime of research on the 19th century Royal Navy and the Pacific Northwest is encapsulated in this volume. Gough stresses the maritime origins of Britain’s role as an, often reluctant, colonial power at the frontiers of empire. The Pacific Northwest, and the future territory of British Columbia, initially factored into the British world-system as a small hub in the Hudson’s Bay Company’s vast fur-trading network. As the resource rich Pacific coast began to be exploited in the 1840s, the need to establish clear border demarcations with the United States increased, and Vancouver Island emerged as a key naval supply station, culminating in the construction of the naval base at Esquimalt. This volume picks up where Gough’s previous volumes, Distant Dominion: Britain and the Northwest Coast of North America, 1579-1809 (UBC Press, 1980), The Northwest Coast: British Navigation, Trade and Discoveries to 1812 (UBC Press, 1992), and Gunboat Frontier (UBC Press 1995) left off.

The connections between colonial periphery and imperial metropolis are ones that Gough is keen to emphasise, and rightly so. The colonial history of British Columbia was profoundly influenced by naval developments throughout the 19th century. Even small warships, at critical moments, could produce profound results. Gough observes the “synchronicity” (page 56) of developments that hinged on single frigate actions, such as that between HMS Phoebe and USS Essex during the the War of 1812 in the Pacific. Even to the discriminating eye of a veteran historian such as Gough, the vagaries of wind and weather over such vast oceans seemed disconcertingly close to providential. Gough remarks that it was this story of the war of 1812 in the Pacific that inspired the 2003 Peter Weir adaptation of Patrick O’Brian’s beloved Master and Commander: The Far Side of the World, and it is this salt-air frontier flavour the imbues much of the text.

The breadth of the text steadily narrows, and what begins as a sweeping chronicle of the War of 1812 in the Pacific transitions to the unification of the Hudson’s Bay Company with Britain’s colonial government, leading to the formation of Fort Victoria in 1843. At this point, the text becomes more appropriately a frontier history, and with the exception of the retelling of the effort to seize Petropavlovsk during the Crimean War in 1854, an operation symbolic of the global scope of the Admiralty’s naval effort during the war with Russia, the remainder of the text is focused on colonization rather than grand strategy.

Gough focuses on the development of British Columbia and Vancouver Island as colonies, primarily during the governorship of HBC fur trader turned governor, James Douglas. Two-thirds of the book are dedicated to the origin, construction and evolution of Esquimalt during the mid-Victorian period, when the port expanded from a small coal and forestry trading post to what would become the Royal Navy’s major Pacific Ocean base, eventually supplanting Valparaiso in significance. After the American Civil War, however, the Royal Navy’s presence on the Pacific began to decline, until the sweeping reforms of Sir John Fisher resulted in the abolition of the Pacific station altogether in 1905. The RN finally handed over control of Esquimalt to the newly formed Royal Canadian Navy in 1911.

The book is lavishly illustrated, including nearly 50 black and white photographs of ships, harbours and portraits, although oddly there is no list of illustrations in the reprint (there was in the 1971 original). The maps are simple but effective, also drawn from the original publication. A particularly gratifying inclusion is a number of useful appendixes containing valuable data on fleet sizes, ship locations, technology and Royal Navy administration, although a list of governors of British Columbia should also have been included, for ease of reference. The book is completed with endnotes, a full index, and features a thorough bibliography that reflects Gough’s breadth of research.

In short, this classic volume helped define the naval historiography of the Pacific Northwest, and, although not as thorough as Gough’s more specialized later publications, is an approachable, engaging, and informative text, well deserving of a first or second appraisal.