BravO! The History of Opera in British Columbia 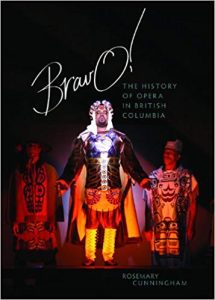 If you think the drama of opera takes place primarily on the stage, BravO! will open a new world to you. In her finely documented history Cunningham takes us from the Bianchi Italian Opera Company of San Francisco’s first opera excerpts in Victoria’s Royal Theatre in 1867 to anticipation of the current production of Lillian Alling, the Vancouver Opera Association’s 2010 season-opening world premiere. She begins with a brief history of opera itself in order to show the state of the genre when European settlement on the BC coast had reached the point at which, in the 1870s and 1880s (while Verdi was still composing), the touring opera companies found a visit to Victoria worthwhile. Vancouver had its first professional production in 1891; opera has been a feature of life in these coastal cities ever since, despite barren periods in Victoria due to the First World War and the Great Depression.

Cunningham manages to illuminate what goes on in boardrooms, drawing rooms, and backstage to make opera productions possible, and she makes these ancillary dramas interesting to anyone involved with or committed to the performing arts. In these times of ever-lessening funding for the arts, her lively discussions of the financing of opera productions are major revelations to those of us who buy tickets, attend performances, and assume (as we should not) that a sold-out house can offset the costs of production. At the end of the Second World War both government and private philanthropic foundations began to make grants available to all the arts. From this point on, the story of opera in British Columbia is one of feast and famine, peaks and troughs, all accompanied by backroom dramas over funding.

In 1959, the Grand Opera Society of BC changed its name to the Vancouver Opera Association (VOA), engaged the young Irving Guttman as director, and launched itself as the only professional opera company in British Columbia. Cunningham traces the fortunes of the VOA through the Guttman years, the Bonynge years from 1974 to 1979, and on to the present, offering extensive documentation from newspaper articles and reviews, interviews, and other sources as, numerous times, the association rode the roller coaster from the brink of bankruptcy and back again. Pacific Opera Victoria (POV) was launched in 1980, defying the odds in succeeding in a city of fewer than the necessary million people to support a professional opera company. This year the VOA celebrates its fiftieth season, the POV its thirtieth.

In addition to her thorough account of these two major opera companies, Cunningham devotes space to “five important opera-related initiatives during the period 1996 to 1974” (52), including the Opera in the Schools Program and the Vancouver New Music Society, both of which are still functioning. She also discusses semi-professional companies such as the Burnaby Lyric Opera, the Vancouver Island Opera, Opera Breve, Opera Appassionata, Opera Pro Cantanti, and City Opera Vancouver. Amateur opera productions in British Columbia, however, did not make it into BravO!. A notable example is the Dawson Creek Symphonette and Choir, which began in 1971 with a full production of Hansel and Gretel and continued until 2007. This group consisted of local orchestra members plus ringers from Vancouver, Victoria, and Edmonton; a local chorus; principals who were often from the VOA chorus; full stage sets made by director Rotraud Lopp’s husband, Erich; and costumes from Malabar. It offered Carmen, La Traviata, Die Fledermaus, L’Elisir d’Amore, and other operas and operettas over its thirty-six-year span and sold out two performances in the high school auditorium every year, blizzards notwithstanding.

In quoting Iain Scott, BravO! concludes with great optimism for the future of opera in British Columbia: “Opera seems to be one of the two fastest-growing art forms amongst eighteen- to thirty-five-year-olds (the other is visiting museums) … because the inherent multimedia experience of opera mirrors their tastes and experience of Hollywood movies and video and computer games” (162). Enlivened by 129 photographs of opera productions and complemented by two appendices, footnotes, bibliography, and a detailed index, this book is a delightful read for anyone interested in opera, in learning about the cultural history of British Columbia, or in financing the performing arts.