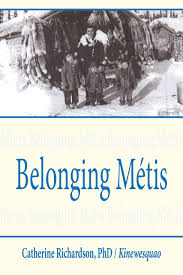 The title of Belonging Métis is apt because the book illuminates the common twenty-first century Métis condition of yearning for belonging. Having been alienated from their geographical homeland on the Prairies beginning in 1870 when Canada invaded and colonized the Red River area, many Métis communities became fragmented, though not irreparably. The book looks at the psychology of Métis selfhood in Canada, and explores some ways of fostering Métis wholeness and belonging, particularly through the use of stories as medicine. Richardson argues stories, and the space to share them, can heal and help form Métis selves that belong to (instead of long for) a whole, healthy community.

Many in the Métis diaspora have been reconstructing their Métis selfhood, a project shared by the author in her own personal life. Richardson makes it clear that her personal position informs her analysis. She is a formally educated Métis community counsellor and professor of social work who grew up in Nanaimo. Like many other Métis, she came to her Métis-ness later in life and had to work to build an intact Métis self, a process she calls the “experience of becoming a Métis person” (45). As a survival strategy many Métis have needed to hide their culture, sometimes even from their own children. Among the twelve participants she interviewed for this book, only two were raised in a Métis household where being Métis was their daily lived reality.

Richardson states that her analysis borrows from both European and Indigenous conceptual frameworks of selfhood. She blends symbolic interactionism (in which the self is created through interaction with the wider society – the “me” lives and gathers experiences, while the “I” processes and integrates these experiences) with narrative theory, so that the “I” is the author of the story and the “me” is the protagonist. Holism is an admirable goal but the book itself is not entirely successful in achieving it. Instead, it is almost like two separate books. In the first four chapters Richardson’s style of writing is heavy with academic theory and jargon. On the other hand, the writing flows well in the more narrative chapters (5-7). In particular, chapter 7 is a gem, containing one long meandering but edifying story, which unfortunately remains unanalyzed and disconnected from the other chapters. Because the Métis stories appear near the end of the book, Euro-academic analysis appears privileged over Indigenous experiences. In addition, though the author states the book is written for all Métis people, the writing in the first few chapters may be difficult to follow for non-academic readers.

Despite these shortcomings, this work offers a substantial academic contribution. Though the book’s focus is not BC, Richardson grew up, was educated, and worked in BC, and several of her participants are British Columbian (interesting as BC is considered outside the Métis homeland). As a historian, I appreciate how she uses Métis history to explain current conditions. Her prescription for exclusively Métis spaces (a “third space”) is well explained and supported. The first space is dominant society, and the second space is First Nations society; the Métis have often been marginalized in both. A third space, where Métis can share stories, creates a sanctuary or psychological homeland. Her participants report a transcendent sense of self-recognition when among other Métis.

Although there has been some progress in terms of aboriginal-centred social work, the practice in relation to Métis people has been overlooked. Though Richardson offers relatively few concrete suggestions for Métis-centred social work, the book will be helpful for social workers and psychologists to further their understanding of contemporary Métis selfhood, which she notes is often pathologized by these helping professions.