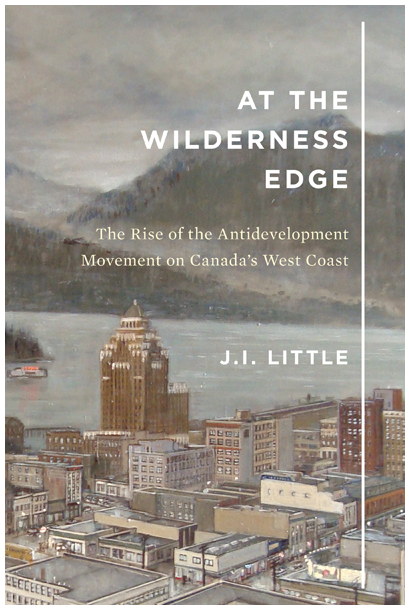 At the Wilderness Edge: The Rise of the Antidevelopment Movement on Canada’s West Coast

In recent years, local opposition to the expansion of the Trans Mountain Pipeline in BC has confounded the plans of oil investors and federal officials alike. The government of Alberta has declared its right to get its product to “tidewater” and criticized activists on the West Coast for standing in the way of jobs and economic progress. Yet as J. I. Little reminds us in At the Wilderness Edge, opposition to development projects has deep roots in southern BC, and the stakes surrounding them are rarely as simple as that of “jobs vs. the environment.”

Little’s slim volume examines five episodes of what he dubs the “antidevelopment movement on Canada’s West Coast.” All five occurred in Vancouver and its environs, and all took place primarily in the 1960s and 1970s. That topic and time period brings to mind the counterculture and high-profile organizations such as Greenpeace. Yet Little has his eye on a different sort of activism. Rather than international campaigns to stop nuclear testing, he examines local resistance to development projects in landscapes and coastal spaces treasured by southern BC’s increasingly urbanized population. His case-studies include the creation of Devonian Harbour Park in Vancouver, the protection of Hollyburn Ridge from commercial skiing development, the foiling of high-density residential construction on Bowen Island, opposition to a coal port in Squamish Estuary, and the prevention of copper mining on Gambier Island. In all five examples, it was not the radical activism that made the difference but rather a “but more broad-based, and more enduring culture of resistance, one that challenged the long-established assumption that there should be few limits or restrictions to economic growth and urban development” (4). It was, in fact, moderate, mostly middle-class residents, many of them women, who saw such developments as threatening their recreational outlets, as well as their particular ways of interacting with nature. In the process, Little reveals that, while ecological concerns often informed these debates, they hinged primarily on competing visions of urban development and recreational access.

Little’s study has much to recommend it. Above all, it highlights Vancouver’s Janus-faced relationship with its natural environment. An industrial port whose origins and wealth hinged upon the extraction of natural resources, the city experienced a profound shift in the post-World War II period, with a growing number of residents expressing misgivings about the assumptions and enterprises that had built the city. Indeed, as Little shows, the very affluence generated by their extractive economy made the residents of southern BC more determined to oppose developments that would further erode the region’s unique natural beauty.

Despite its strengths, At the Wilderness Edge does have shortcomings. First, Little chooses to include only success stories in his study, thereby rendering a limited picture of the course of environmental politics in the region.  Second, his decision to focus on middle-class activism results in some missing context. Mayor Tom Campbell’s clashes with left-wing activists are largely absent, as are countercultural outlets such as the Georgia Straight, which often acted as a clearinghouse for information about local as well as international causes. Finally, for a study of profoundly emotional and contentious issues, the tone of At the Wilderness Edge is oddly detached. The book offers a clinical, blow-by-blow account that is heavy on details but fairly light on narrative or analysis.  Nevertheless, Little has made an important contribution to the literature on the environmental history of southern BC, and his book makes for a useful complement to other studies, such as Sean Kheraj’s Inventing Stanley Park.