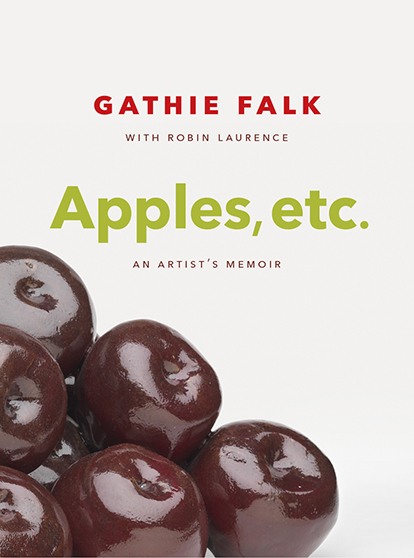 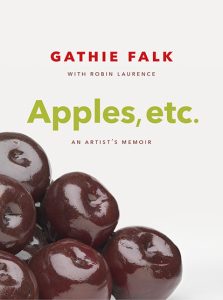 Apples, etc. An Artist’s Memoir by Gathie Falk, edited by Robin Laurence, is an account of the acclaimed Vancouver-based artist’s life that offers new insight into her tenacious experimentation with the ordinary. Like a grocery list started but not finished, the arrangement of the book ditches a chronological order and instead alternates accounts of Falk’s artworks and certain possessive relationships, such as my mother, my father, my homes, my secrets, my marriage. The approach enables artworks to be seen in parallel with events from the artist’s life, for whom daily experiences and studio work were always tightly laced together. Occasionally, important moments appear in multiple chapters, and while this sometimes slows the overall narrative, it abides by Falk’s skillful use of repetition, where situations might be viewed anew through slight shifts in context.

As narrator, Falk’s recollections are warm, but also sensible and graphic in detail—a kind of precision in accounting perhaps tied to experiences of hardship and poverty in the artist’s early life. Born in 1928 to Russian immigrant parents in a rural Mennonite town in Manitoba, the early death of her father, chronic illness of her mother, and deployment of her brothers during the war efforts meant that from her mid-teens onwards, Falk was tasked with managing the fragile finances of her family. The early part of the book traces a dizzying migration of relations and possessions from town to town and job to job, as the artist managed debts and paid bills, while trying to finish her education and nourish her creative energies. Picking strawberries, plucking chickens, filling cellophane bags with raisins and dates, and sewing pockets into the inner lining of suitcases at a luggage factory were just some of Falk’s menial jobs.

The stark survivalism of Falk’s young life is not readily evident in the artworks produced during that period, but the memoir makes possible certain connections that the critics failed to consider at the time. In the chapter on Home Environment (1968), a solo exhibition at Douglas Gallery that launched the artist’s career, the bizarre sculptural components, including a plucked chicken in a birdcage, packaged TV dinners, and oversized suit ties, form a puzzling assemblage that is nevertheless cleverly simple in relation to class labour and domestic life, as explored in other chapters. The enigmatic quality of Falk’s work is furthered, not curtailed, by the simple and direct connections to Falk’s lived experiences.

Falk’s personal perspective is also acute in her reflections on the leading art movements of the time, including those she was often mistakenly considered to be a part of. She describes how she had done too much factory work to be interested in the machinic qualities of Op Art, that she felt distanced from Pop Art because of its slick consumerisms, and felt unable to claim the theoretical statements of Arte Povera as it was simply a lived reality as a working-class artist making work frugally out of necessity—not choice. While these frank reflections are limited in the scope of the book, Falk’s perspective brings much needed understanding of class-consciousness into the realm of global artistic movements, demonstrating the importance of memoirs of women, or immigrants, or refugees, and other marginalized groups, in shaping how these narratives are historicized. The memoir also offers details on the burgeoning artist-run and collective-based culture in Vancouver during the sixties, seen through the light of various close friendships.

The book stays true to the kinds of homely powers that Falk has, and continues to, dedicate her life to—apples and the rest of it all. Already the subject of much adulation by critics, many of Falk’s stories exist in abbreviated forms in other catalogues, as told to other authors. Apples, etc. An Artist’s Memoir avoids being wearisome by offering a more full and dynamic telling from the artist herself. Falk’s artistic process has long been seen as intimate with her life, but this memoir offers a deeper understanding of the work it has inspired.