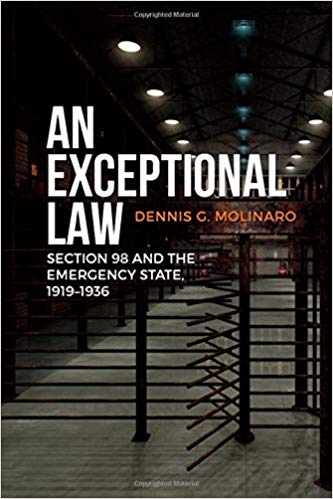 For most of the past eighty years, Section 98 of Canada’s Criminal Code has been seen as an “exceptional law” in a different way than Dennis Molinaro regards it. Because of its limited life (1919-1936), the wide-ranging powers it conferred on police and political authorities, and its notoriety for being used in an unprecedented legal assault aimed at destroying the Communist Party of Canada (CPC), the law was considered to be aberrant.

It was also highly unpopular. It became the focus of an energetic and pioneering civil rights campaign in the mid-1930s aimed at striking it from the Criminal Code. After the 1935 electoral repudiation of R.B. Bennett (disparaged as “Iron Heel” Bennett) and his Conservative Party, which had championed its use, the law was overturned by W.L. Mackenzie King’s Liberal government.

Molinaro regards Section 98 as exceptional because it defies the norms of liberal democracy, which are taken to include standards such as the rights to political dissent, to freedom of speech, and to freedom from punishment for arbitrary and ill-defined pretexts. More than that, because it illustrates the tendency towards the use of repression in this country’s history, he sees it as a sign that the Canadian elite regards principles of liberal democracy as dispensable in its quest to carry out its prescribed nation-building vision.

Molinaro traces the key elements of Section 98 to 1917, when Prime Minister Robert Borden’s cabinet attempted to snuff out the rising labour revolt by creating Privy Council Order 2384, an order-in-council authorized under the War Measures Act. In this way, legislation that was intended to see only temporary use at a certain moment of national emergency, the First World War, became normalized and applicable during peacetime, whenever authorities decreed that an emergency existed, regardless of objective fact.

In 1919, with the war over but labour resistance undiminished, Borden folded many parts of PC 2384 into Section 98 and Section 41 of the Immigration Act, which together saw extensive use when the Great Depression began in 1930, ushering in a decade of impoverishment and mass resistance. Bennett’s government used the Immigration Act provisions to deport people deemed to be “undesirables and communists” (70), and Section 98 (in conjunction with the Ontario government) to jail eight leaders of the CPC, as well as for selected other prosecutions.

Even the supposed revocation of Section 98 in 1936 did not halt the use of exceptional law, as critical parts of it were inserted into other sections of the Criminal Code, which Molinaro contends “demonstrated the ongoing process of normalizing of emergency measures” (214).

Examining emergency legislation of various forms over two decades, Molinaro justifiably argues that neither Canada nor other Western states such as Britain and the US are full-fledged liberal-democratic states. Instead, they can better be described as “states that practise liberal democracy” (230, emphasis Molinaro’s). That is, they uphold democratic values not consistently, but when the elite deems it appropriate.

In identifying that general pattern, Molinaro is unerring. Where he strays, indeed passes beyond the strength of his case study, is in claiming that the process “started with Section 98” (228).  Any close reading not just of Canadian history but of what happened in Britain and the US, shows a long pattern of the use of repressive legislation for the purpose of capitalist nation-building. For instance, the perceived revolutionary emergencies of the late eighteenth and early nineteenth centuries – although they were not active revolutions in any of the three Western states mentioned – were dealt with through the introduction and use of exceptional law such as the 1798 Alien and Sedition Act in the US, the benign-appearing stamp duties on newspapers in Britain, and the sedition laws under which Robert Gourlay was banished from British North American in 1819.

Even resistance that could never have been considered a significant threat to the Canadian state – the Fenian movement in the 1860s, and the Riel-led uprisings in 1869-70 and 1885 in the Canadian West, for example – was put down brutally (although not by means of new legislation). Indigenous and mixed-blood people, therefore, might well ask Molinaro to expand his vision of ways that the Canadian state has employed violence for the goal of narrowly defined nation-building.

Molinaro also overlooks the use of “unexceptional” law as a repressive mechanism. High profile as Section 98 was in prosecuting CPC leaders in 1931, petty law such as vagrancy and trespass sent far more activists to prison during the 1930s than did Section 98.