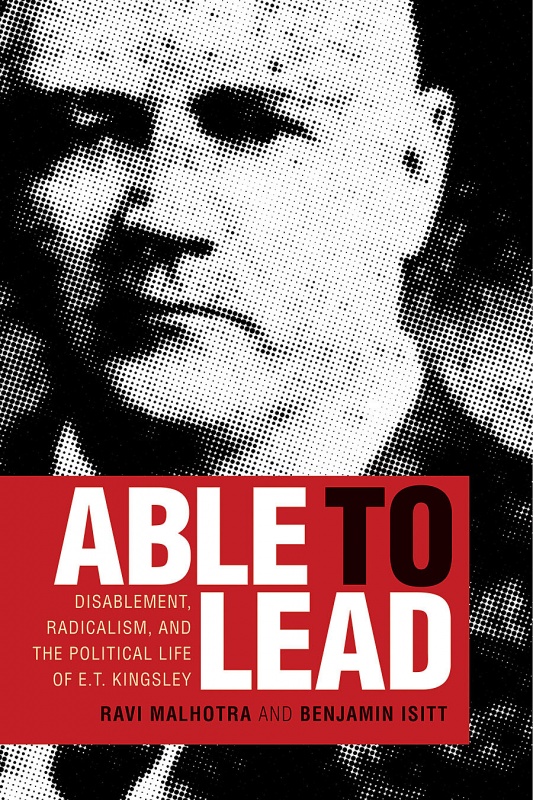 Able to Lead: Disablement, Radicalism, and the Political Life of E.T. Kingsley

By Ravi Malhotra and Benjamin Isitt

Eugene Thornton Kingsley, an influential socialist in early British Columbia, was 33 years old when he adopted his revolutionary stance.  Employed as a brakeman on a railway in rural Montana in 1890, he fell between two moving train cars and lost both legs.  During a lengthy recovery in hospital, Kingsley read the books of Karl Marx.  After his discharge, he returned home to his wife and two young sons equipped with a pair of wooden prosthesis and a cane.  Two years later Kingsley inexplicably left his family and moved to California.  Authors Ravi Malhotra, a disability rights and law professor, and Benjamin Isitt, a historian, examine Kingsley’s ensuing activism through the lens of ableism, law, and the socialist movement.

Arriving first to San Francisco, Kingsley began participating in politics and by 1895 was secretary of the Socialist Labor Party.   He adopted the “impossibilist” position of SLP leader, Daniel De Leon, rejecting trade unionism and other reformist measures in support of a wholesale overthrow of the capitalist system.  Malhotra and Isitt suggest Kingsley’s life circumstances as a double amputee and his detachment from the wage-earning conditions of working people may have led him to his life-long commitment to being a “one-plank Marxist.”

Also in 1895, Kingsley delivered his first speech at the Socialist Hall. He would give hundreds more talks to working people on themes such as “The Aims of Socialism” and “Civilization versus Nature,” accumulating thousands of travel miles.  Kingsley honed his debating skills as a socialist candidate in a total of four municipal and Congressional elections while residing in various locations along the American west coast.  He lost every election, receiving less than five per cent of the vote in each run.

In 1902, Kingsley was invited to speak to coal miners on Vancouver Island.   By the end of the year, he had settled in Vancouver.  Soon after he was appointed managing editor of the Western Clarion, the newspaper of the Socialist Party of BC.  He was instrumental in the realignment of the SPBC along the “impossibilist” line, and when the party was reconfigured into the Socialist Party of Canada in 1904 Kingsley continued in a leadership position.  He lived and worked in the city’s downtown, running his own print shop from 1905 to 1914.   Affectionately known by his comrades as “the old man,” Kingsley ran on the socialist ticket in four provincial elections and two federal elections up to 1926, losing each time.  His best showing, 18 per cent of the vote, occurred in a provincial by-election in 1907.

Kingsley wrote on the issues of the day, including the Komagata Maru incident, women’s suffrage, and conscription.  When Canada entered the First World War, he penned an editorial condemning Germany, rather than expressing global solidarity with the working class.  For this stance, he was drummed out of the SPC.  Politically adrift, Kingsley began writing for the BC Federation of Labour’s Federationist newspaper in 1915, and then in 1918 helped found the Federated Labor Party.  A month before the Winnipeg General Strike, a government censor declared Kingsley “one of the most dangerous men in Canada” in a then-confidential document.  As the political landscape changed over the next decade, Kingsley became increasingly isolated.  Following his death in 1929, aged 72, there was no funeral or other public expression of remembrance.

Unfortunately, much of Kingsley’s private life remains unknown, despite the diligent research of Malhotra and Isitt.  As a result, the authors frequently speculate, including about Kingsley’s “closeted” attitude toward his disability.  Kingsley did not talk about his accident, sometimes passing as able-bodied.  The reader is provided with answers on the fate of Kingsley’s wife and children, however, and valuable insights are garnered from brief testimonials by socialist friends.  Also revealing is Alexander Maitland Stephen’s The Gleaming Archway, a historical novel set in BC and published in 1929.  A lively character, Tacey, a socialist amputee who edits a newspaper, is undoubtedly based on Kingsley.  His driving will was “…tempered by a great kindliness and was rendered strong by loneliness which sought refuge in incessant action.” (40)

Kingsley did not appear to have a romantic relationship as the authors make clear more than once.  A depiction of Vancouver’s bachelor scene comprised in part of seasonal labourers, adventurers, and drifters, could add a dimension to the portrait.  Would he have frequented the many workingmen’s pubs and dined out in cafes?  As for Kingsley’s physical well-being, would a city hospital—or veteran’s hospital—provide medical services if he required occasional assistance because of his disability?  Tracing details about Kingsley’s socialist comrades, such as Wallis Lefeaux, could also shed more light.  For instance, Lefeaux ran for political office on the socialist ticket multiple times starting in 1907 and was finally elected to the BC legislature in 1941.  Had Kingsley’s persistence in electoral politics influenced Lefeaux?

The E.T. Kingsley Historical Archive, (www.abletolead.ca), a website curated and launched by the authors, opens the door to further research on the people and themes in this book.  Despite Kingsley’s intensely private nature, the authors succeed in providing original research on pieces of his personal life and a great deal more on his public contributions.  Kingsley displayed a life of courage on many levels following his life-altering workplace accident.  His energetic political activism gave working people a much-needed champion at a time of rampant exploitation and few social safety nets.  The authors’ focus on this historical figure enriches and widens the lens on BC’s history.