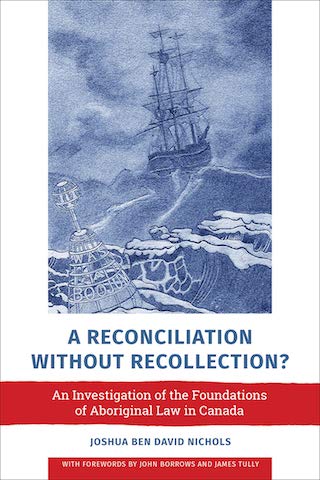 A Reconciliation Without Recollection?

Resource developments in British Columbia, and especially the Trans-Mountain and northern BC LNG pipeline, have led to nationwide opposition from some Indigenous groups as well as support from others. There have been many attempts by journalists and others to explain the background to these events. These attempts seem well intended, although somewhat superficial given the limitations of space and deadlines. Many readers will have wished for more detailed information and analysis, especially from Indigenous authors directly involved in such events or who have examined the issues in greater depth.

There have been a number of books and articles by Indigenous authors dealing with politics, law and Indigenous peoples in Canada. These include books by Harold Cardinal and William Wuttunee in response to the White Paper of 1969 by the Pierre Trudeau government proposing the termination of Indian status.  Some writers deal with philosophy and political theory, such as Gerald Taaike Alfred, Glen Coulthard, Kiera Ladner, Tracey Lindberg and Dale Turner. There are also books by legal theorists such as John Borrows, Gordon Christie and Sakej Henderson. Probably, the best known book is The Inconvenient Indian: A Curious Account of Native People in North America by Thomas King (2012).

One book that successfully combines personal experience with the history of Indigenous peoples in BC under colonization is Price Paid: The Fight for First Nations Survival (2016) by Bev Sellers. Another is Unsettling Canada: A National Wake-Up Call (2015) by the late activist Arthur Manuel who died in 2017, with a foreword by Naomi Klein and an afterword by Grand Chief Ronald Derrickson. This covers the history from the White Paper to the Tsihlqot’in decision in 2014, the first ruling that Aboriginal title exists over particular lands. It also discusses Indigenous politics and, in particular, the differing perspectives of some Indigenous leaders who are described as willing to surrender Aboriginal rights to get quick deals and of the more traditional leaders who insist on never giving up those rights. The book is especially helpful in setting out clearly and incisively the perspective of those who see the BC treaty process as a form of extinguishment and doubt the sincerity of non-Indigenous governments.

Just prior to his death, Arthur Manuel completed another book. Anyone wishing to understand recent events in BC and Canada should read The Reconciliation Manifesto: Recovering The Land, Rebuilding The Economy. It provides the required context for those events going back to early European settlement and covering events up to the Trans Mountain pipeline. Like Cardinal 50 years ago, Manuel is clear and direct and does not mince words. The Liberal Government of Justin Trudeau (including the then Minister of Justice, Jody Wilson-Raybould) is denounced for its sleight of hand in claiming to adopt the United Nations Declaration on the Rights of Indigenous Peoples but then recasting it so it “would apparently change nothing in Canada because it was designed to conform to existing Canadian laws and policies” (55). UNDRIP has yet to be recognized under federal law (it has been affirmed in BC) and this discussion will be of direct relevance when legislation is finally introduced by the government as long promised.

Manuel writes that politicians like Trudeau ignore fundamental rights to self-determination and land and merely “offer mea culpas for Canada’s past behaviour and call for reconciliation, as if all we needed was a bit of counselling, ‘an honest conversation’” (57). Canada as a society is still in denial about historical and current colonialism (62). It “was and remains a thoroughly colonial country, built on the dominance of one race over another for the purpose of seizing and occupying their land” (65).  Colonialism means that Indigenous people “either live in poverty or assimilate and disappear completely into the settler society” (80). The legal underpinnings for Crown title are problematic and Canada is founded on legal quicksand (89 – 92). Leading cases in Aboriginal law are welcomed as moving the yardstick towards recognizing Aboriginal rights and title, but a political deal is needed to finally decolonize because “the court cannot, finally, admit that the Crown has no legal basis to our lands because the court is itself part of the Crown … and would therefore undercut its own legal basis to exist” (110). Meaningless, no-strings attached “reconciliation” is cynically used to cover “any and all manipulation or diminution of our rights and title” (200). The final chapter is a six step program of decolonization based on recognition of the right of self-determination and meeting “our rights as title holders and decision makers on the land and our economic and cultural needs” (278).

The books by Arthur Manuel are excellent very general introductions to Aboriginal law. Joshua Nichols, who is an assistant professor in the Faculty of Law at the University of Alberta and of mixed-roots Anishinaabe ancestry, offers a much more detailed discussion of many specific issues. In contrast to Manuel’s volumes, A Reconciliation Without Recollection: An Investigation of the Foundations of Aboriginal Law in Canada demands a lot of the reader and is for the specialist rather than the general reader. It is a work of outstanding scholarship, drawing upon the author’s background in philosophy (in which he received a Ph.D.) as well as law (in which he received another). Although the topics covered and some of the conclusions will likely be familiar to those with a detailed knowledge of Aboriginal law, the range of references in both law and philosophy is staggering and the depth of analysis is profound. This book is by no means an easy read, but is very rewarding for those willing to invest the time and attention to retrace perhaps familiar routes in order to see things often missed or from a sometimes very unfamiliar viewpoint. I found especially penetrating the suggestion that “indirect rule” rather than “reconciliation” better fits the framework that the Supreme Court of Canada is using to mediate the relationship between the Crown and Aboriginal peoples (290). It is a novel application of a system of colonial administration associated with the British Empire in parts of Asia and Africa. This and many other insights (often contained in page length footnotes) certainly deserve the often over-used expression “thought provoking.”

A key argument reflected in the title is that the courts repeatedly assert and never question that the Canadian state (the “Crown”) has sovereignty, legislative power and underlying title to land. “There is no historical moment that can be referred to that could possibly explain how the Crown acquired these powers; therefore, there can be no recollection, no memory, and no context for them” (288). It is a judicial process by which the Crown’s unquestioned power-over “Indians” and their lands allows them to unilaterally reconcile the duties flowing from recognition of existing Aboriginal and treaty rights in section 35 of the Constitution Act 1982. “If this is what we are calling reconciliation, then it is a game whose outcome is fixed in advance” and Aboriginal people live under a vast administrative despotism (289). Shared sovereignty or “treaty federalism” should replace it.

Eighty years ago, Leonard Barnes suggested that the then fashionable language describing imperial rule as a ‘trust’ for Indigenous peoples was “a vague and decorative notion to which anyone can attach any meaning he pleases” – “The Empire as Sacred Trust: The Problem of Africa” (1938). Manuel and Nichols suggest that “reconciliation” is the modern Canadian equivalent.