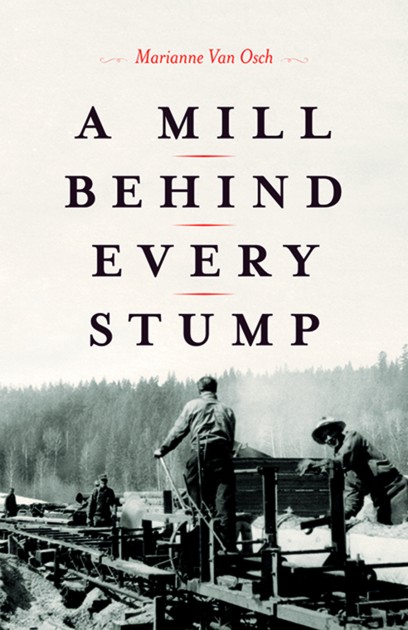 A Mill Behind Every Stump 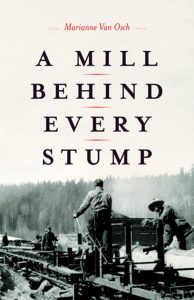 This modest book aims to preserve the vanishing world of the Cariboo homesteader.  It recounts a life of geographic isolation, in Secwépemc traditional territory, that bred both freedom and self-reliance. Life in this context also cultivated an appreciation for stories because “there wasn’t anything else to do” (ix).

Marianne Van Osch is a Cariboo-based newspaper contributor and former teacher.  A Mill Behind Every Stumpis her seventh book on the region’s history.  Like her other volumes, this is a collaborative effort because the stories are not hers.  Van Osch began by producing delimited oral history transcriptions for friends and their families.  She rightly concluded that the profoundly local narratives she captured held wider value. Here, she relies on the then 92-year-old Louis Judson as her oral history informant.  Van Osch has edited her recorded conversations into a preface, 43 roughly chronological, profusely illustrated micro-chapters, and an Epilogue.

Born in 1924 at Ashcroft, our one-eighth Indigenous narrator, Louis Judson, leads us through at least five generations of his family, beginning with his paternal grandfather in 1880s Washington State. Louis’ own childhood in 1920s and 30s Forest Grove BC was unlike mine (or, I doubt, yours).  “No one worried about the children when they were far away for a day or so on an adventure” (68).  This laissez-faire world came at a price.  Louis’ older step-brother broke his neck falling off a horse (168), while Louis himself was exempt from Second World War service because of a many-month-long undiagnosed broken wrist.  He also later lost a foot to a portable sawmill (117).

Over his career, Louis worked variously at fishing, trapping, prospecting, canning tomatoes, riding the rails and as a water witch.  His most consistent activities were road building, logging and running portable sawmills.  In this realm he witnessed the passing of small self-employed horse loggers sending railway ties to the UK, and their replacement by larger corporate entities running more modern diesel equipment and chainsaws for a wider range of distant markets.  Louis went broke competing with these larger professionalizing operations.  Later in life, he also worked at the highly industrialized Weldwood Mill in Exeter.  However, he preferred to work harder for less pay outside, where he was healthier and happier.

This book has all the strengths and weaknesses that oral history implies.  It is strong in the small details of daily life, saturated with a richness in reporting that one could never hope to recover from scattered archival texts.  The role of narrator goes back and forth between author and informant and the book is relaxed and conversational.  Although, occasional transitions from one sub-story to another can be abrupt and come with little warning.  The book could have further benefited from more historical context.  For example, it is never explained whether the family did not have money for shoes and clothes because they were marginalised from the cash economy, or because of the Great Depression.  Also, the many family photographs are lacking comment or attribution. What was it about this particular family that inspired them to document their existence with so many photos? This seems at odds with their self-reported modest means.

At only $20, local history afficionados can confidently place this book alongside similar firsthand accounts such as Ervin Austin MacDonald’s The Rainbow Chasers (1982), Alan Fry’s The Ranch on the Cariboo  (2002 [1962]) and Charlie Faessler’s 2010 book, Bridge Lake Pioneer.

In sum, both Van Osch and Judson lament the disappearance of the homesteader’s world. And yet, A Mill Behind Every Stump shows us that the resourcefulness of these same self-starters created the very conditions of change by which they themselves transformed their earlier context.