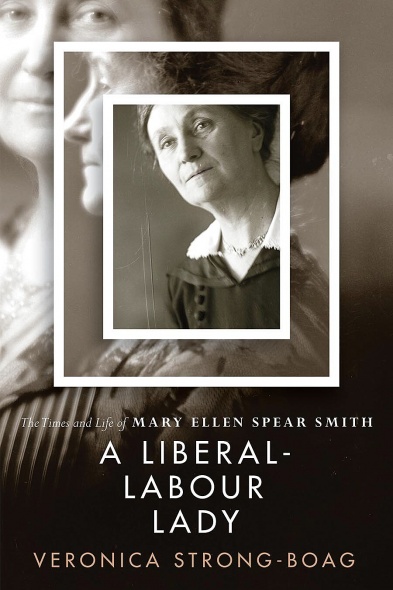 A Liberal-Labour Lady: The Times and Life of Mary Ellen Spear Smith

Biographies offer such tantalizing opportunities.  Readers can generally look forward to either delving into the details of a fascinating life – the accomplishments and setbacks, the loves and losses – or they can be encouraged to enter that life themselves and view the world through the eyes of the stranger.  The former approach illuminates the life, the latter the times, of the biographical subject.  The various advantages of each approach illustrate why it is that “life and times” biographies are so popular, offering the best of both worlds.

And so it is with Veronica Strong-Boag’s magnificent new biography of the remarkably underappreciated Mary Ellen Spear Smith.  Even if only because of her position as first female cabinet minister in the British Empire, Smith’s name should be remembered alongside the Grace Annie Lockharts, the Agnes Macphails, and the Cairine Wilsons of the Canadian pantheon.  But she is far less well known than these other firsts, an error of history that Stong-Boag seeks to address.  In doing so, she not only offers a perspective on the life, and on the political and social times, but also something more nuanced.  A Liberal-Labour Lady gives the reader a more embodied perspective on being a wife and mother, a politician, and an Imperialist, in a world where those identities rarely co-existed and are even more rarely examined in juxtaposition.  It is not always a pretty picture of either Smith or the world through her eyes, but the unique perspective that Strong-Boag offers ensures that this analysis offers surprisingly far-reaching insights.

Smith (or Mary Ellen, as she is generally referred to throughout the book) arrived in Nanaimo British Columbia in 1892 as part of the “settler revolution” that girded the creation of the “British World” in the years before World War II.  She and her husband and young family came from the mining district of Britain, arrived in the mines of British Columbia, and set about making a better life for themselves and for those like them.  Ambitious, hard-working and successful, Mary Ellen Smith’s life is in many ways classic fodder for biographical treatment.  Figuring out why that hasn’t been the case subtly drives this impeccably researched biography forward.

During her lifetime, Smith was many things that suggest a far more complex personality than the shorthand version of her accomplishments address.  But she was far from unique in holding these contradictory views and positions, and so in untangling them Strong-Boag offers not just an analysis of early 20th century politics, but also of family and community, or social norms and widespread assumptions.  Before disembarking for Canada, she married a widower and became a mother immediately and then repeatedly; she played an active role in her Methodist church and was Ralph Smith’s “respected partner,” although it was he who had earned acclaim as a “radical leader” known for his speeches decrying capitalism’s excesses and abuse of power (p. 30). Mary Ellen shared her husband’s Liberal-Labour politics, even if she did not share in the spotlight.  That began to change following their arrival in Nanaimo where a community of newcomers proved receptive to Mary Ellen’s own temperance oratory and organizational prowess.  With Ralph’s rise to union leadership, the two seem to have solidified their standing as leaders of the left in their adopted home.

Here the trajectory of Mary Ellen’s life begins to deviate into less appealing territory – not all the time, but enough to suggest that her tale isn’t quite the uplifting story of a scrappy miner’s wife who succeeds in becoming the first female Cabinet minister in the Empire.  Mary Ellen’s readiness to use racial distinctions, especially between the Chinese and European miners but also between white and Indigenous British Columbians, to lever the achievement of equality elsewhere underlines the contradictory nature of her politics.  Her leftist liberal-labourite sentiments were definitely not colour blind, as Strong-Boag makes clear.  As she moved, vicariously through Ralph, into increasingly significant political positions (he served first in the BC legislature, then in Ottawa and then back to provincial politics before his death in 1917), she developed her own political voice and style.  In Ottawa, for example, she “put herself on display on an intimidating scale,” developing intimacies with as many of the power-brokers as possible.  A favourite of the Lauriers, frequent attendee at all the top balls and events, and increasingly called upon to give suffrage speeches, Mary Ellen deftly wielded the tools of soft power (pp. 69-76).  She also shifted, as her husband had, into the Liberal orbit, where pragmatism often outweighed principal.

Smith moved into politics directly following her husband’s death, but she brought decades worth of public speaking, influence-cultivation and political platform development with her. She also brought disillusionment with the Liberals in BC and ran as an Independent Liberal in 1918.  That first election victory, in spite of the Liberal machine and in the shadow of the 1916 achievement of white female suffrage in BC, was Smith’s most substantial; thereafter her share of the vote continued to drop through 1924, her last victorious campaign.  Through the 1920s, Smith doggedly stuck to the centre of the political spectrum while others swung left, earning the ire of former supporters in labour and losing supporters from all sides of the coalition she had built.  With the fight for suffrage won, gender politics took a back seat to other matters, with the once-popular Mary Ellen Smith relegated to history.

Smith’s legacy is clearly mixed.  As a woman, she mostly played by men’s rules rather than changing them; as a labour advocate she aspired to middle class; as a Liberal-Labourite she shifted to the Liberals, and as a Liberal she ran as an Independent.  Strong-Boag captures all these nuances through impressive research into all the contradictory corners of Smith’s life, and with a compositional flair that brings both the woman and the shifting ground beneath her feet to life. She also, therefore, showcases why Smith has been largely forgotten: her life spanned too many spaces to be neatly summarized, her accomplishments occurred alongside failures, many of her own making, and often because of a white Imperialist worldview that earns no sympathy now.  Not quite a woman for her times, let along ours, Smith seemed destined to disappear.  Until, that is, Strong-Boag took on the task, uncovering both the good and the bad, using Smith as a lens onto gender relations and gender politics, BC and Ottawa, and electoral politics and the power of connection.  The result is a refreshingly complex picture of early 20th century Canada, and of the crooked path to power.