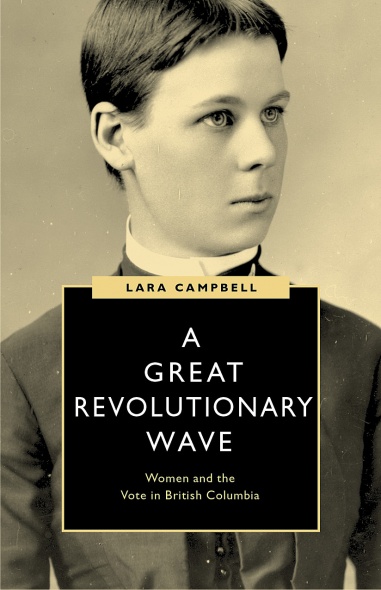 A Great Revolutionary Wave: Women and the Vote in British Columbia

A core rationale for this book series, Lara Campbell explains, is the necessity to “tell regional stories” about the women’s suffrage movement (13). Campbell demonstrates, for example, that the absence of a party system in BC provincial politics before 1903 gave the province’s struggle a distinct character.

Campbell’s regional focus is also justified by her treatment of elections at the municipal level and for school boards. Property requirements, women’s marital status, and race all determined eligibility, and local officials themselves were sometimes murky on would-be voters’ qualification. Victoria women cast votes after the 1906 Municipal Elections Act forgot to exclude them as “householders,” although Premier McBride rectified the error (55).

Maria Grant, in a 1913 deputation, claimed that a new and more progressive type of society was being forged on the west coast. Her characterization of the province’s “almost blank” past betrayed a common blindness about Indigenous host societies (118). Pro-suffrage views co-existed with blatant racism: Mary Ann Cunningham, who in 1894 characterized women as among “the most advanced thinkers,” (129) complained the following year that, in being denied the franchise, they were grouped with “savages.” Maria Grant asked whether it was fair that women were “placed side by side with felons, Chinamen and idiots” (122).

Campbell explains that suffragists objected to the province’s 1916 referendum on women’s enfranchisement. Although it ultimately passed with 70 % approval, they recognized the injustice of leaving a question of basic rights up to the popular will—an analogy Gordon Campbell’s government might have remembered during their ill-fated 2002 referendum on Indigenous treaty rights.

Some clarification is needed regarding the admittedly arcane and shifting rules under which the federal franchise was conferred. The process was indeed centralized in 1885, but after decentralization in 1898, the 1920 Dominion Elections Act represented a new shift to nationally standardized rules. Campbell may mislead the reader in saying that the 1920 Act “made the provincial electoral list the basis of the federal vote: as a result, anyone who could not vote provincially was also excluded from voting federally” (13). In fact, women in Quebec had the federal franchise long before they qualified to vote provincially in 1940, as Campbell later acknowledges. Rather, a 1918 Act (8-9 George V, c 20) enfranchised women who possessed “the qualification which would entitle a male person to vote at a Dominion election in the province.” The 1920 Act (10-11 George V, c. 46) enfranchised men and women over twenty-one who were not otherwise disqualified, and eliminated the property qualification, which had varied in each province. It continued to disqualify “an Indian ordinarily resident on an Indian reservation,” prisoners, patients in mental hospitals, those receiving indoor relief, and those who “by the laws of any province in Canada, are disqualified from voting for a member of the Legislative Assembly of such province in respect of race.” In the book’s final chapter, Campbell engages with this important race question and the 1949 achievement of racial equality in BC’s provincial vote.

BC’s thriving socialist movement also informed the context. Campbell shows that, while some labour elements supported the suffrage struggle, others dismissed it as a distraction from the primary conflict between “masters and slaves” (151). Tensions intensified with the need to integrate Great War veterans into the labour market. A BC Federationist editorial denounced “noisy” suffragists and their “pet hobby” (155).

A diverting chapter devoted to anti-suffragists is probably the least location-specific, since the same arguments were aired with tiresome frequency. A 1908 Victoria Daily Times editorial insisted that the average woman did not read reports of city council proceedings (74). It is tempting to speculate that male voters who did so were probably pretty thin on the ground as well. Another anti-suffragist claimed to have “too much respect” for women to wish to expose them to the coarse world of politics (82).  The engaging chapter “Performing Politics” provides vivid depictions of “political theatre” performed by BC women and suffragists around the world—“boisterous” public debates, mock and model Parliaments, picnics, and parades. Despite such parallels to suffragism elsewhere, Campbell convincingly shows why place matters.